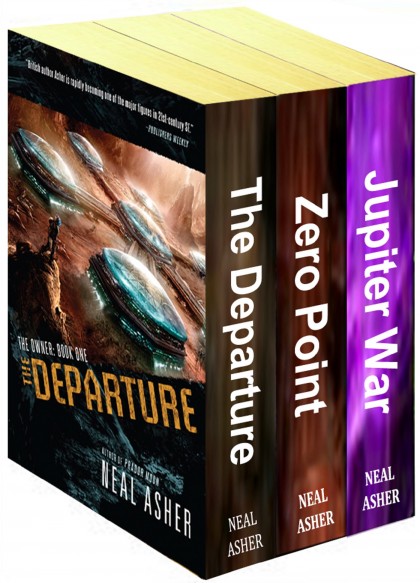 The Complete Owner Trilogy by Neal Asher, including The Departure, Zero Point, and Jupiter War.

The Departure: Visible in the night sky the Argus Station, its twin smelting plants like glowing eyes, looks down on nightmare Earth. From Argus the Committee keep an oppressive control: citizens are watched by cams systems and political officers, it's a world inhabited by shepherds, reader guns, razor birds and the brutal Inspectorate with its white tiled cells and pain inducers. Soon the Committee will have the power to edit human minds, but not yet, twelve billion human being need to die before Earth can be stabilized, but by turning large portions of Earth into concentration camps this is achievable, especially when the Argus satellite laser network comes fully online . . . This is the world Alan Saul wakes to in his crate on the conveyor to the Calais incinerator. How he got there he does not know, but he does remember the pain and the face of his interrogator. Informed by Janus, through the hardware implanted in his skull, about the world as it is now Saul is determined to destroy it, just as soon as he has found out who he was, and killed his interrogator . . .

Zero Point: Earth’s Zero Asset citizens no longer face extermination from orbit. Thanks to Alan Saul, the Committee’s network of control is a smoking ruin and its robotic enforcers lie dormant. But power abhors a vacuum and, scrambling from the wreckage, comes the ruthless Serene Galahad. She must act while the last vestiges of Committee infrastructure remain intact – and she has the means to ensure command is hers. On Mars, Var Delex fights for the survival of Antares Base, while the Argus Space Station hurls towards the red planet. And she knows whomever, or whatever, trashed Earth is still aboard. Var must save the base, while also dealing with the first signs of rebellion. And aboard Argus Station, Alan Saul’s mind has expanded into the local computer network. In the process, he uncovers the ghastly experiments of the Humanoid Unit Development, the possibility of eternal life, and a madman who may hold the keys to interstellar flight. But Earth’s agents are closer than Saul thinks, and the killing will soon begin.

Jupiter War: Alan Saul is now part-human and part-machine, and our solar system isn't big enough to hold him. He craves the stars, but can't leave yet. His sister Var is trapped on Mars, on the wrong side of a rebellion, and Saul's human side won't let her die. He must leave Argus Station to stage a dangerous rescue -- but mutiny is brewing onboard, as Saul's robots make his crew feel increasingly redundant. Serene Galahad will do anything to prevent Saul's escape. Earth’s ruthless dictator hides her crimes from a cowed populace as she readies new warships for pursuit. She aims to crush her enemy in a terrifying display of interstellar violence. Meanwhile, The Scourge limps back to earth, its crew slaughtered, its mission to annihilate Saul a disaster. There are survivors, but while one seeks Galahad's death, Clay Ruger will negotiate for his life. Events build to a climax as Ruger holds humanity’s greatest prize -- seeds to rebuild a dying Earth. This stolen gene-bank data will come at a price, but what will Galahad pay for humanity’s future?