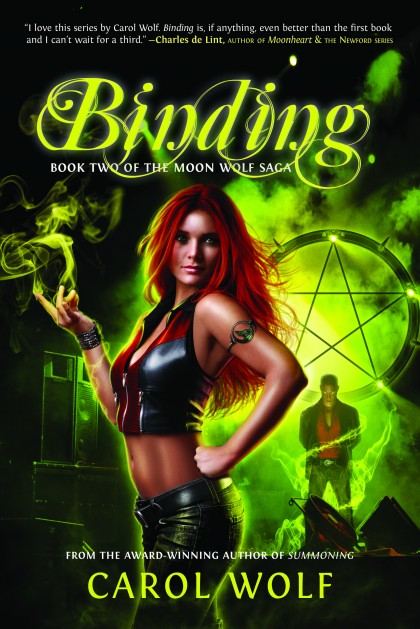 What do you do after you’ve saved the world—and nobody believes you?

Amber is a teenage runaway, hiding out in Los Angeles, who is also a daughter of the wolf kind. And, not long ago, she had her own personal demon. Richard was her servant, her lover, and a hellish force bound to the earth against his will. Together they turned back the World Snake that threatened to destroy the city—and she had granted Richard his freedom.

Now Amber is alone, but nobody accepts that she has truly shed her demon. Many still fear the World Snake and seek to capture the demon’s power for their own purposes, unaware that Richard has already departed the mortal realm. Amber finds herself hunted, in both wolf and human forms, by cultists, illusionists, raisers of power, and even an evil veterinarian.

Saving the world was one thing. To save herself, Amber may have to call back her fearsome demon lover, who is no longer bound to obey her . . .

Carol Wolf is an award-winning playwright whose work has been seen on both coasts and five continents. She has written more than 20 plays including The Terrible Experiment of Jonathan Fish, Eddie and Molly’s Garden, Day/Blacknight/Morning, and The Thousandth Night, which won the London Fringe First, the Bay Area Critic’s Circle Award and the L.A. Drama Critic’s Award. She also wrote scripts for the blockbuster video games Blood Omen: Legacy...