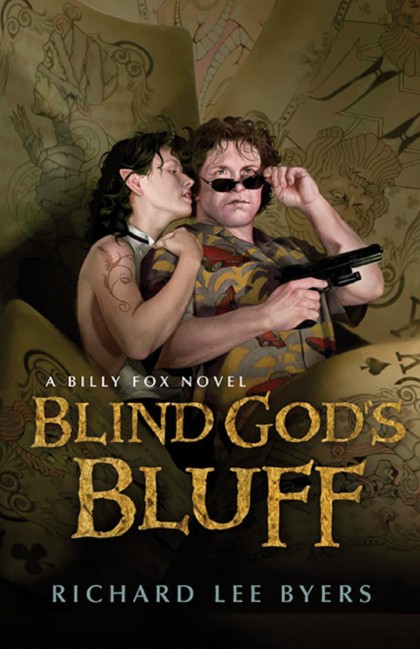 Ante up for the game of a lifetime!

Billy Fox, a small-time gambler on a losing streak, has more than enough problems on his hands, owing too much money to some very impatient people. But when he rescues a blinded stranger from a swarm of bloodthirsty fairies, Billy’s life gets a lot more complicated. . . .

Seems the stranger is actually a powerful local god who is involved in a high-stakes Florida poker tournament against various supernatural challengers. And with his eyes currently missing, he needs somebody to take his place at the gaming table. Before Billy knows it, he finds himself playing against the likes of an ancient Egyptian mummy, an unbearably seductive succubus, a mechanical man, an insect queen, and a cannibalistic beast-man. And not just cards are in play; magic, bloodshed, and cheating are not only expected, they’re encouraged.

Everybody, including a sexy satyr-girl with her own cards up her sleeve, thinks that Billy is in way over his head. But Billy is a born gambler and, when the chips are down, he might just change his luck for good!

Blind God's Bluff is an outrageously addictive urban fantasy that will keep you flipping pages until the very last hand.

Richard Lee Byers is the author of over thirty fantasy and horror novels, including a number set in the Forgotten Realms universe. A resident of the Tampa Bay area, the setting for many of his horror stories, he spends much of his free time fencing and playing poker. Friend him on Facebook, Follow him on Twitter, and read his blog on Livejournal.