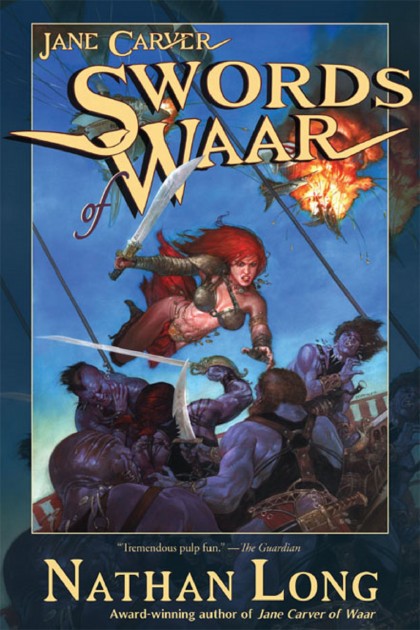 Jane Carver, a hell-raising, redheaded biker chick from Coral Gables, Florida, had found a new life and love on Waar, a savage planet of fearsome creatures and swashbuckling warriors. Until the planet’s high priests sent her back to Earth against her will.

But nobody keeps Jane from her man, even if he happens to be a purple-skinned alien nobleman.

Against all odds, she returns to Waar, only to find herself accused of kidnaping the Emperor’s beautiful daughter. Allying herself with a band of notorious sky-pirates, Jane sets out to clear her name and rescue the princess, but that means uncovering the secret origins of the Gods of Waar–and picking a fight with the Wargod himself.


Swords of Waar is the wildly entertaining sequel to Jane Carver of Waar, and continues the raucous adventures of science fiction’s newest and most bad ass space heroine.

Nathan Long is a screen and prose writer, with two movies, one Saturday-morning adventure series, and a handful of live-action and animated TV episodes to his name, as well as ten fantasy novels and several award-winning short stories. He hails from Pennsylvania, where he grew up, went to school, and played in various punk and rock-a-billy bands, before following his writing dreams to Hollywood—where he now plays in various punk...