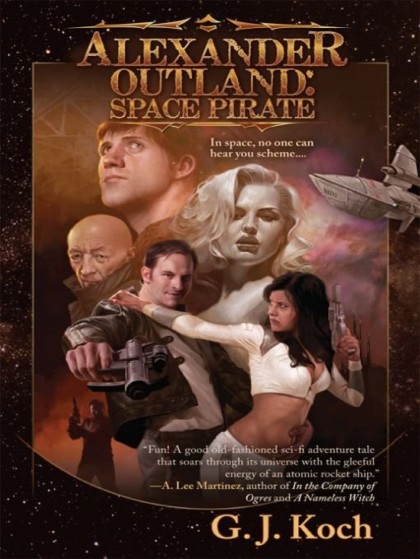 Captain Alexander Outland of the Sixty-Nine (short for Space Vessel 369, of course) is the best pilot in the galaxy. He’s also a pirate, a smuggler, and loved and loathed by women in umpteen solar systems. His crew of strays and misfits includes an engineer of dubious sanity, a deposed planetary governor, an annoyingly unflappable Sexbot copilot, and a slinky weapons chief who stubbornly refuses to give the captain a tumble.

Outland just wants to make a decent living skirting the law, but when an invisible space armada starts cutting into his business, he soon finds himself in hot water with the military, the mob, mad bombers, and an extended family of would-be conquerors. And that’s not counting an occasionally telepathic spy . . . .

Like any sensible scoundrel, he hates heroics. They’re risky and they don’t pay well. But to keep his ship and crew in one piece, and make time with a certain hard-to-get weapons chief, he might just have to make an exception–and save the galaxy in spite of himself!

G.J. Koch writes science fiction. Not the hard stuff, though. Because that requires actual scientific knowledge or at least actual scientific research. Knowledge may be power and research may be cool, but they take time away from writing jokes, action, and romance, and being witty in the face of death is what it’s really all about. Check out G.J.’s rollicking Alexander Outland: Space Pirate series from Night Shade Books and...